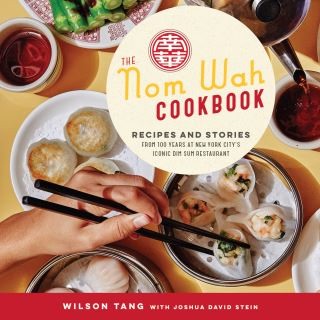 For the last 100 years, Nom Wah Tea Parlor has been slinging some of the world’s greatest dim sum from New York’s Chinatown. Now owner Wilson Tang tells the story of how the restaurant came to be—and how to prepare their legendary dishes in your own home.

In this book, Nom Wah’s owner, Wilson Tang, takes us into the hardworking kitchen of Nom Wah and emerges with 75 easy-to-make recipes: from bao to vegetables, noodles to desserts, cakes, rice rolls, chef’s specials, dumplings, and more.

We’re also introduced to characters like Mei Lum, the fifth-generation owner of porcelain shop Wing on Wo, and Joanne Kwong, the lawyer-turned-owner of Pearl River Mart. He paints a portrait of what Chinatown in New York City is in 2020. As Wilson, who quit a job in finance to take over the once-ailing family business, struggles with the dilemma of immigrant children—to jettison tradition or to cling to it—he also points to a new way: to savor tradition while moving forward. A book for har gow lovers and rice roll junkies, The Nom Wah Cookbook portrays a culture at a crossroads.

Wilson Tang is the owner and operator of Nom Wah Tea Parlor. Prior to taking over the business in 2010, he was a financial analyst for Morgan Stanley. Wilson has expanded the Nom Wah footprint to include Nom Wah Tea Parlor in Philadelphia and Nom Wah Nolita, a contemporary offshoot in New York City that opened in 2016. Wilson lives with his wife and two children, Ryan and Lucy, a few blocks away from Nom Wah Tea Parlor.

Joshua David Stein is an author and editor living in Brooklyn. He is the coauthor of Notes from a Young Black Chef, Il Buco Essentials, Food and Beer, and Epicurean Journeys, and the author of To Me He Was Just Dad. He served as the U.S. editor for the bestselling Where Chefs Eat. Stein is the editor at large at Fatherly, a contributing editor at Food & Wine, and the former restaurant critic for the New York Observer and the Village Voice. His work has appeared in New York, the New York Times, Esquire, GQ, the Guardian, and many other outlets.